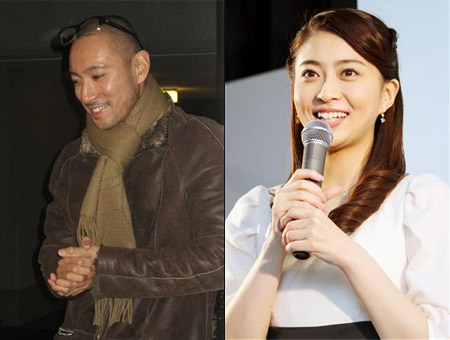 Playboy kabuki star Ichikawa Ebizo (31) is on the verge of finally settling down. He and freelance newscaster Kobayashi Mao (27) spoke yesterday for the first time about their relationship and said they plan to get engaged in the near future. Ichikawa spoke to reporters in front of his home in Tokyo shortly before 11pm last night. “When I first met her last December I had a feeling this would be the person I would be with.” He said he proposed at the end of June, adding “I will love her forever.” Renowned as a playboy after relationships with such actresses as Yonekura Ryoko (34), Sato Eriko (27) and Takaoka Saki (36), he refused to be taunted when a reporter asked, “Is it time to pay the piper?” He replied by saying simply, “She’s a wonderful person, so I guess it is.”

Meanwhile Kobayashi was the one who started the media buzzing with a brief mention at a PR event yesterday afternoon, before making a formal announcement on the TBS “News Zero” show last night. She first met Ichikawa while interviewing him for the show on the subject of “an encounter that changed your life.” An ardent kabuki fan, she watched Ichikawa perform every night for a week after that interview and is a regular visitor to the Kabukiza theater in Tokyo. The speed of the marriage plans has caused the usual speculation as to whether Kobayashi is pregnant but it’s been reported that she’s not. Ichikawa’s father, Danjuro XII (who previously performed under the Ebizo stage name), is performing this month and both father and son have performances scheduled for January, so a formal engagement is likely to be held in December.

Ichikawa, formally Ebizo XI, is one of the “princes” of kabuki, coming from a long theatrical lineage. Together with other handsome young stars such as Nakamura Shido, he has helped keep kabuki popular with younger audiences. They regularly appear in movies and TV dramas – Ichikawa played the lead in NHK’s yearlong taiga drama series “Musashi” in 2003. And their off-stage antics have helped keep them in the gossip columns.

Kobayashi, on the recommendation of her older sister Maya (30), also a freelance TV announcer, first made a name for herself on the Sanma-hosted NTV variety show “Koi no Karasawagi” while a student at Sophia University. She became a weather reporter for Fuji TV in 2003 and the following year had a part in a late-night drama. From 2005 she started appearing regularly in dramas on several networks. She joined the News Zero team when the show was launched in October 2006.