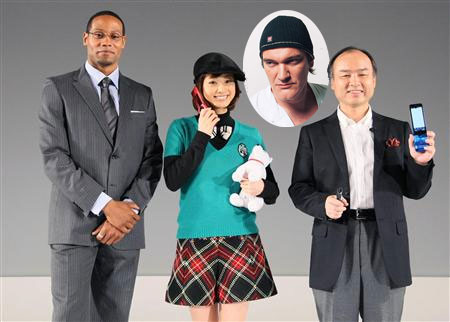 On Tuesday, Softbank Mobile announced their lineup of new models and a major new addition to the “White Family” who appear in their commercials. There have been more than 60 commercials in the series since it started in June 2007, based around characters played by Ueto Aya (Daughter, photo center), Dante Carver (Son, photo left), Higuchi Kanako (Mother) and a white dog as the Father. Joining them will be Quentin Tarantino (46), who did some filming while here to promote his latest movie, “Inglourious Basterds.” That movie stars Brad Pitt (45), who was also in town and has appeared in Softbank TV commercials in the past.

Tarantino will play Uncle Tara-chan, with an image based loosely on the legendary Sakamoto Ryoma. The 19th-century samurai was one of the most prominent figures to embrace western culture and famously carried a Smith and Wesson revolver along with his sword. The image seems to suit Tarantino, the man who brought us the “Kill Bill” movies, perfectly. Asked about working with the director, Ueto said, “I was surprised that he was so fired up. He was really into it and ad-libbed a lot of the samurai moves. Maybe I should ask him to make a Hollywood version of the White Family.” The photo also includes Softbank CEO Son Masayoshi.