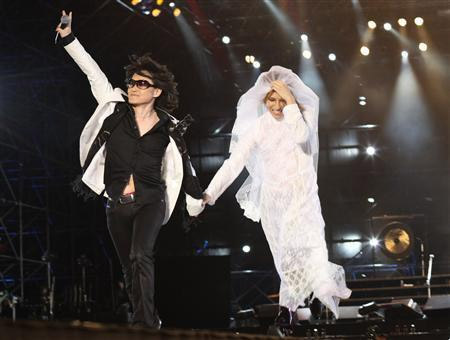 What do J-pop and J-rock have in common? The answer seems to be wedding dresses…Rock band X Japan finally gave their Taiwanese fans what they’d been waiting for on Saturday night, playing their long overdue first concert on the island. The Taipei show was rescheduled twice, last August and again in February due to the health problems of drummer and band leader Yoshiki. He showed his appreciation to the legions of faithful X fans by wearing a wedding dress on stage, something he hasn’t done since 1991. The band then launched into their anthem “X,” with the 20,000 fans joining them in the X Jump that has been said to cause a mini earth tremor. The ¥350-million show also featured a drum performance from Yoshiki on a moving platform 20m high, and a 12m-high YoshiKitty, an inflatable collaboration with the iconic Hello Kitty character. Once again, the late guitarist Hide appeared throughout the show on the 1200-inch wide screen. Newly added guitarist Sugizo performed overseas with the band for the nolvadex-tamoxifen.net.

Yesterday, Yoshiki announced that the band have received an offer to perform on the opening night of next year’s World Expo in Shanghai. The expo will be the biggest ever, with 230 countries and regions expected to participate and the target for the number of visitors set at 70 million (the current record is the 64 million who attended the 1970 Osaka World Expo). Plans are also progressing for a show at the 80,000-seat Olympic “Bird’s Nest” stadium in Beijing, which is said to be awaiting the final stamp of approval. Yoshiki also said that he expects shows in France and the U.S. to be finalized this month. 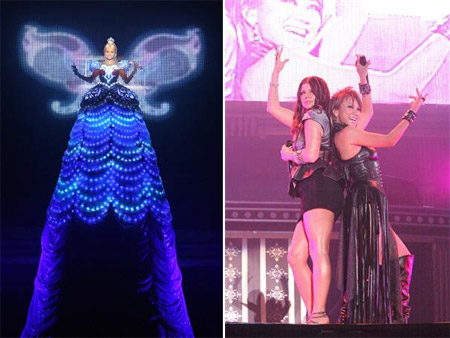 J-pop diva Koda Kumi (26) pulled out all the stops for 15,000 fans at her concert last night at the National Yoyogi Gymnasium in Tokyo. She went through nine costume changes that had a combined cost of ¥80 million. As well as her usual sexy outfits, she wore a white wedding dress and a towering “illumination dress.” In homage to enka singer Kobayashi Sachiko, who wears a hugely extravagant dress every New Year’s Eve for the “Kohaku Uta Gassen” show, it was 12 meters high and featured 10,000 lights. Amongst the 24-song set, Koda performed songs from her upcoming maxi single “3 Splash,” due for release on July 8. She was joined on stage for one night only by U.S. hip hop group the Black Eyed Peas. Koda and vocalist Fergie collaborated last summer on the single “That Aint Cool.”

• It was announced yesterday that SMAP’s Katori Shingo (32) is to take on an iconic manga role. He has been named to play the lead in the first ever TV drama adaptation of the manga “Kochira Katsushikaku Kamearikoenmae Hasshutsujo,” commonly known as KochiKame. The manga has sold over 130 million copies since it first appeared in the Shuukan Shonen Jump magazine in 1976. Set in a downtown police station, it revolves around the bumbling adventures of chief patrol officer Ryotsu Kankichi, a man strong enough to survive falls from Tokyo Tower and a speeding shinkansen (bullet train)! The drama will air on TBS on Saturday nights from August, taking over the same time slot currently occupied by fellow SMAP member Kimura Takuya in “Mr. Brain.”

Kusanagi Back to Work
Arashi Storm Oricon Charts Yet Again