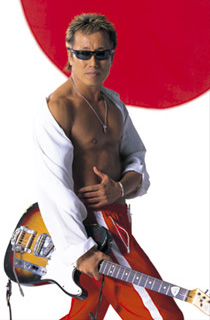 Rock singer-songwriter Nagabuchi Tsuyoshi (50) is planning a comeback to the big screen after eight years. Movie director Fukusaku Kenta (34) was among the big names attending a PR event yesterday to launch Nagabuchi’s first album in four years, “Come On Stand Up!” The pair decided it was time to put some much-needed “macho” back into Japanese movies. “They say the Japanese movie industry is healthy these days, but it’s all weepies and comedy,” said Fukusaku. “The male action movies my father loved so much are dying out. I want to make use of Nagabuchi-san’s physique and make a real fight movie.” Their relationship goes back to the 1988 TBS drama “Tombo”, directed by Kenta’s father, the late Fukusaku Kinji (1930-2003). With the wiry, “junky” look of his younger days, Nagabuchi won rave reviews for his starring role as the yakuza Ogawa Eiji. These days he’s a lot more buffed and hangs out with such fighters as K-1 star Kohiruimaki Takayuki (29) and sumo grand champion Asashoryu (26), both in attendance at yesterday’s event. Fukusaku Kinji directed such violent classics as “Jingi Naki Tatakai” (Battles Without Honor and Humanity) and “Battle Royale”, but his death in 2003 forced his son take over at the helm of “Battle Royale II”. No details of the latest movie project are available but it will be Nagabuchi’s first movie role since the “Tombo” follow-up “Eiji” in 1999.

• Rocky Wada (53), a popular TV and radio personality in Hokkaido, has been arrested for paying for corrupting a minor. Police say that last summer he met a high school girl, who was 15 at the time, through a “deaikei” mobile website. He arranged to meet her at a hotel in Tomakomai City and paid her ¥15,000 for sex. Following his arrest in Sapporo yesterday, he said he has no memory of the incident. Real name Wada Norio, he is the host of two long-running shows based around his knowledge of western rock music. Both TV Hokkaido and FM North Wave are planning to cancel his shows.