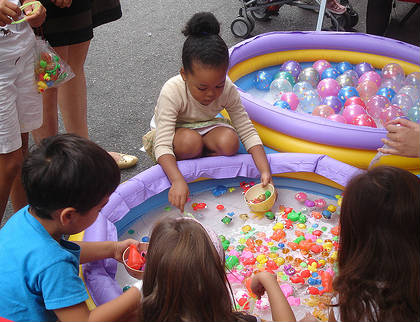 Kingyo Sukui literally means “goldfish scooping” and if you’ve ever been to Japanese summer matsuri (festival) you will no doubt have seen this game in action. You have a plastic scoop with a thin paper center with which you have to try to catch as many small, live goldfish swimming in a small pool as you can before the paper dissolves in the water. These days it’s more likely to be small plastic toys that you try to scoop up, which is more in keeping with current attitudes to the treatment of animals. And let’s face it, kids these days are probably more likely to look after a few little One Piece figures that care for real live fish. or it could be little rubber fish, Kitty Chans, Anpanman, or any number of popular characters.

Whatever the catch of the day, this simple game is a perennial favorite at all matsuri. Another is water yoyos, which are simply water filled balloons on a rubber string. Like kingyo sukui, the challenge is to catch them with a metal hook on a length of paper “string” before the paper dissolves. And like kingyo sukui, it’s not as easy as it looks. The challenge in kingyo sukui can be modified by using different grades of paper – the thicker the paper, the longer it lasts and the easier it is to catch something.

These games are increasingly becoming part of Japanese-themed culture festivals at schools and colleges across the world. And with their simple rules and setup, as well as the colorful prizes to be won, they make an easy but unique and appealing addition to any summer event.

Everything that you need to set up your own kingyo sukui or water yoyo stall is available from our Japan Store.