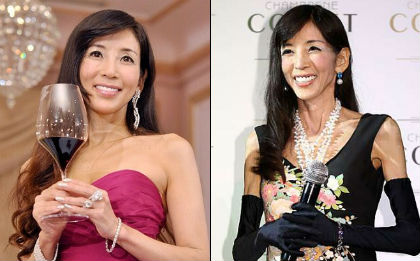 Actress Kawashima Naomi died Thursday of bile duct cancer at a Tokyo hospital. She was 54. Her death was announced on Facebook by her husband, pastry chef Yoroizuka Toshihiko. The pair had been married since 2009.

Kawashima made her debut as a singer with “Champagne No.5” in 1979 while still a student at the prestigious Aoyama Gakuin University. She gained popularity in the early 1980s as a late-night radio DJ and on the NTV variety show “O-warai Manga Dojo,” where she displayed a very high level of manga artistry.

She went on to establish a career as an actress, appearing in the mid-90s gangster movie series “Shin gokudo no onna-tachi” and the controversial 1997 NTV drama series “Shitsurakuen.” The latter generated huge media attention with its raunchy sex scenes and intense story about a suicidal extramarital affair. A wine aficianado and socialite, Kawashima remained famously single into middle age and was often the face of the “arafo” phenomenon – women choosing to remain single as they reached “around forty.”

Kawashima continued acting even after being diagnosed with cancer in 2014, and in spite of being visibly affected by the condition. Her last performance on stage was just a week ago.