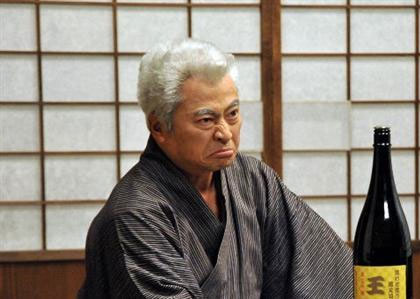 Happy news for comedy talento Lasar Ishii (56) who is getting married not once but twice this year. And not only that but in both cases it’s to a woman younger than his own daughters! Ishii is currently appearing in the NHK drama series “Carnation” in which his character just last week married a much younger woman, played by “Kill Bill” star Kuriyama Chiaki (27).

And on last night’s edition of the “Odoru! Sanma Goten!!”, hosted by comedian Akashiya Sanma (56), he revealed that he and his 24-year-old ippanjin girlfriend plan to tie the knot soon. It’s been a year since Ishii divorced his wife of 32 years after a 15-year separation. As we reported at the time, it was reported that he had been spotted on a Christmas Eve date with a woman in her 20s and also that she had dumped him soon after he resented your-cholesterol-faq.com a ring. But it is believed that his fiancee is the same woman, who is 32 years younger than the star and younger than both of his daughters.

UPDATE: It turns out that Ishii and the young lady in question are already married, having tied the knot on January 11. And she is not the same person he broke up with around the time of his divorce. He and his new bride met in September and Ishii proposed just a month later. She is currently a university student.