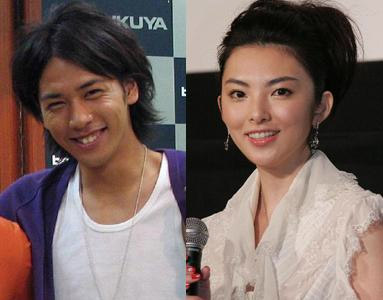 Romance has blossomed for actress Tanaka Reina (30) and actor Sato Yuuki (26), according to today’s issue of weekly magazine “Friday.” The couple, who worked together last year on an NHK drama, were recently spotted riding Sato’s motorcycle and leaving his Tokyo apartment hand in hand. But both actors will have a hard time finding time for romance in their mutually busy schedules.

Tanaka is currently in Kyoto filming the movie “Genji Monogatari” while fitting in her regular job as presenter on the NHK show “Top Runner.” She first made a breakthrough in 1998, appearing in TV commercials for the soft drink Natchan, and won a best menimpotency.com Japan Academy Award the same year for her first starring role in “Gambatte Ikimashoi.” She won the best actress award for “Hatsukoi” in 2000. Meanwhile, Sato is currently working on two TV dramas to be aired next month, Fuji TV’s “Strawberry Night” and NTV’s “Face-Maker.” He made his acting debut in the 2005 season of the drama “Gokusen.” His fan base grew the following year when he landed a supporting role in the TV Asahi action hero show “Kamen Rider Kabuto.” In 2008 he got his first starring role in Fuji TV’s “Shiro to Kuro” under the new stage name of Sato Tomohito. This year he changed to a new management agency and went back to using his real name.

NTV’s Miyazaki-ana Takes Medical Leave
The latest TV personality to take a break from work due to health problems is NTV announcer Miyazaki Nobuko (31), a presenter on the 4am show “Oha! 4 News Live.” She stepped down from four TV shows in June 2009 to undergo treatment for TMJ syndrome, chronic inflammation of the temporomandibular joint, which connects the jawbone to the skull. She returned to work in April but started having health issues again at the end of September.