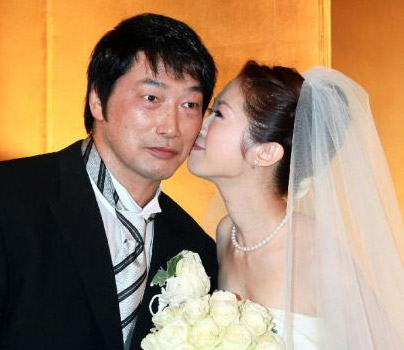 Popular professional wrestler Kobashi Kenta (43) and enka singer Mizuki Mai (36) finally made their 14-year relationship official on Saturday. The couple tied the knot at a municipal office in Tokyo and held their wedding ceremony at the Imperial Hotel. As they posed for photos after the ceremony, one reporter shouted out, “Mai-san, kiss!” Kobashi seemed bemused at first but was beaming after his bride gave him a peck on the cheek. A demon in the ring, he was momentarily reduced to the ranks of the typical lovestruck male.

Kobashi overcame cancer of the kidneys in 2007, but is currently undergoing rehabilitation for knee and elbow injuries. No doubt thinking of his responsibility as vice-chairman of the Pro Wrestling Noah troupe, he told reporters, “I want to get back in the ring as soon as possible.” But of course he now has added responsibilities, not least of which is his new bride. “Looking after her is the most important thing for me. And I want to have lots of kids!” Mizuki is currently enjoying sales success of her latest single “Nozomizaka Kara Ashitazaka.”

Ikeuchi Junko Dies at 76
Oshio Manabu Out on Bail