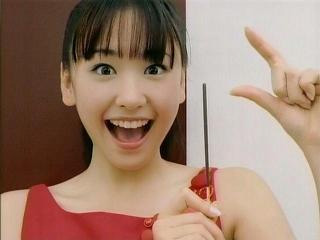 Young up-and-coming actress Aragaki Yui (19) looks like having another successful year. She appeared in three movies last year – “Koi Suru Madori”, “Waruboro” and “Koizora” – and got a slew of best newcomer awards. At yesterday’s Golden Arrow awards in Tokyo, given for various media categories, she was the winer in the movie category. Other winners included: Broadcast Award – actor Oguri Shun (25); Newcomer Award – actress Kikuchi Rinko (26) and comedienne Yanagihara Kanako (22). Not attending the show at the Hotel New Otani was young golf sensation Ishikawa Ryo (16), who won the sports category.

• Disney’s princesses, including the first new one in 15 years, were in Tokyo yesterday for the Japan premiere of the movie “Enchanted”. Star Patrick Dempsey (42) joined Giselle, Snow White, Cinderella and Jasmine on stage at the Tokyo International Forum.

• Someone else making an arrival for the first time in 15 years is R&B queen Chaka Khan (54), who recently two Grammys for her latest album “Funk This”. She announced yesterday that she will be visiting in June and performing her first solo shows here since 1993. She’ll play a the Billboard Live venues in Tokyo and Osaka.

• Actress Miyazaki Aoi (22) and actor Takaoka Sousuke (26) caused a mini panic in Tokyo’s Omotesando yesterday as they and their showbiz guests left their wedding party. The couple tied the knot back in June of last year. Among yesterday’s guests were actor Asano Tadanobu (34) recently back from the Oscars; young actors Oguri Shun (25), Sato Ryuta (28), and V6’s Okada Yuichi (27); and actress Aso Kumiko (29).

• Former sumo behemoth Konishiki (44) revealed on his blog yesterday that he had surgery in Hawaii last month to reduce the size of his stomach. The gastric bypass is his latest attempt to shed some of the massive weight he gained on his way to becoming sumo’s heaviest ever wrestler. In his prime he averaged around 264kg (580lbs).

• For tomorrow’s 30th anniversary edition of information show “Zoom In! Super” NTV are bringing back the once-popular Anton Wicky (67), popularly known as Wicky-san, for one day. The Sri Lankan’s one-point English conversation lesson ran on the show from 1979-94, and he was one of the earliest foreign stars on Japanese TV.