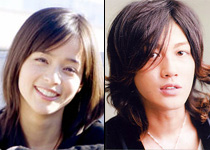 Actress Kato Rosa (22) and Johnny’s Jimusho star Akanishi Jin (23) have the hots for each other, according to today’s issue of weekly gossip magazine “Friday”. The pair were spotted having dinner together with friends in mid-May, after which Akanishi drove Kato back to her Tokyo apartment and spent the next 17 hours there. He then became a regular visitor, leading reporters to assume that Kato has ended her relationship with actor Tamaki Hiroshi (27) and taken up with the young idol singer. Akanishi is a member of KAT-TUN, and has appeared in several popular drama series such as “Gokusen” and “Anego”. He shocked fans last October when he took a break to study English in the U.S., leading many to speculate that he had quit showbiz, but he returned to performing in Japan in the spring. Kato is one of the most closely watched of today’s young actresses. With an Italian father, she’s also one of the growing number of “halfs”, who seem to be almost taking over in music and TV. She is currently starring in her first drama lead role as an ambitious young bar hostess in “Jotei” on TV Asahi. In standard practice, her agency has denied her relationship with either Tamaki or Akanishi.

• Miike Takashi’s latest movie is to be entered in competition at the Venice Film Festival (August 29 – September 8). “Sukiyaki Western Django” stars Itoh Hideaki (31) and is a Japanese take on the classic spaghetti westerns. Miike, the man behind such acclaimed movies as “Audition” and “Ichi the Killer”, was chosen by Time magazine as one of the Top Ten directors of the 21st century. He will be aiming to be the first Japanese to take the festival’s Golden Lion award since Kitano Takeshi (60) in 1997.

• Nigerian-born talento Bobby Ologun (44) is now a Japanese. He appeared on the “Mezamashi Terebi” show yesterday and revealed that he had changed his nationality after returning from Nigeria. He’s taken his wife’s family name of Konda, and so is now officially Konda Bobby.