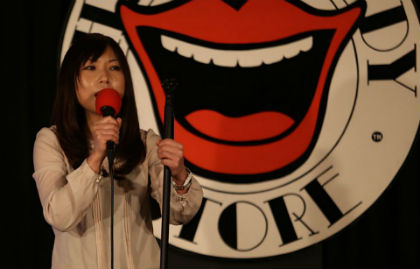 Congratulations to Japanese comedian (or should that be comedienne?) Kotani Yuriko, who has won this year’s BBC Radio New Comedy Award. The final was held last Friday live on BBC Radio 2, and broadcast live from the Comedy Store in London on the show of veteran DJ Steve Wright. Kotani beat five other finalists, chosen from 750 audition tapes, eight regional heats and two semi-finals, with votes being cast by listeners via social media.

After her win Kotani said, “I’m speechless… This is so wonderful!” She will take home £1,000 and development support from the BBC radio comedy department, with the chance to appear in slots across the BBC. Previous winners and finalists include such successful stars as Rhod Gilbert, Sarah Millican, Alan Carr, Lee Mack and Josie Long.

Watch Kotani’s winning comedy set in the video link below.