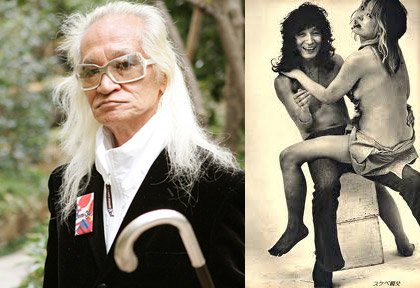 Aging rocker Uchida Yuya (71) has been arrested by Tokyo Metropolitan Police for stalking a middle-aged woman who wanted to break up with him. He has acknowledged charges of writing intimidating letters and having spare keys made to her home, but denies that he was trying to threaten her. The pair had been dating since about December 2009 but the woman (50) says she had suffered violent attacks since March of last year. In a letter found in her mailbox on April 2, Uchida wrote, “I have contacted your employer. I told them one of their employees is involved with a criminal gang and doing drugs. I haven’t given them your name yet! You have a week to think it over and call me! There is still time!”

A veteran rock musician who dropped out of high school in order to emulate his idol Elvis Presley, joining a rockabilly group at the age of 17. He switched between bands several times in the late 1950s and early 1960s before starting a movie career. He was one of the members of a special band put together to open for the Beatles in June 1966. Uchida has also insinuated himself into political life. He ran in the Tokyo gubernatorial election in 1991 and last year attended public review and prioritization meetings of government programs. His trademark is to append the phrase “rock ‘n’ roll” to every statement he makes. Reports on his arrest didn’t mention f he took that same attitude into police custody. Uchida has been married for almost 40 years years to top actress Kiki Kirin (68), with whom he has a daughter, actress Uchida Yayako (35), but they have been separated for all but the first two years. He is also the father-in-law of popular actor Motoki Masahiro (45).

Uehara Miyu in Apparent Suicide
The Highs and Lows of Marriage