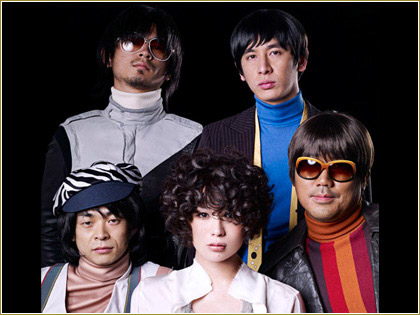 The repercussions continue following the arrest of musician Hata Toshiki (34, photo front left). Drummer for Shiina Ringo’s band Tokyo Jihen, he was arrested in the western Tokyo suburb of Mitaka on February 10 for interference with a public servant in the execution of his or her duties, the formal description of his drunken assault of a police officer. Confectionery maker Ezaki Glico have changed the song in their currently running TV commercials for the “Watering Kiss Mint Gum” product, dropping the original Tokyo Jihen track “Sora ga Natteru”…for a version without Hata’s drumming! The CM also has a different credit title, attributing the song to Shiina rather than her band. Major cosmetics maker Shiseido, who also use one of the band’s songs in its TV commercials, say they are “studying the situation.” The song was due to be released as a single next week, but that has now been postponed indefinitely. Two scheduled appearances by Tokyo Jihen on the TV Asahi show “Music Station” have also been canceled.

Hata’s arrest came on Thursday night when a neighbor called the police to say someone had broken her bathroom window. When a policemen showed up, he was promptly taken down by a “rugby tackle” from Hata. He woke up the next morning in police custody and said he had no recollection of the incident.

Takahashi Katsumi Ties the Knot
Actor Takahashi Katsumi (49) announced today that he got married last month. In a fax sent to the media, he said he and his ippanjin bride tied the knot in mid-January. The announcement came as Takahashi finished his appearance in a recent theater production, which ended its run yesterday.

Wakki, Marie in Tokyo Car Trouble
Comedian Wakki (38) had his car broken into last night, according to media reports released today. A bag that included cash and his driver’s license was stolen from the car, which was in a car park in the Shinagawa district of Tokyo. Wakki, real name Wakita Yasuhito, is one half of the popular comedy duo Penalty.

It was reported by Tokyo police this evening that talento Marie (23) caused a (presumably) minor traffic accident in the capital today. She was driving through an intersection in Meguro when she hit a minicar. There was no mention of any injuries.