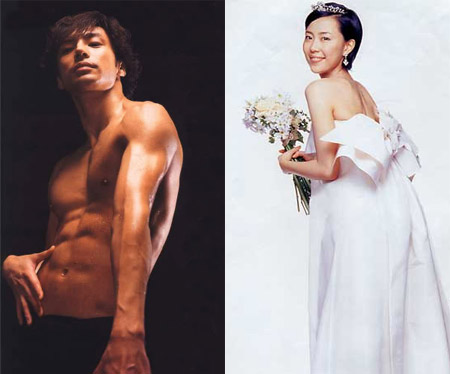 The latest high-profile showbiz couple is actor and former Johnny’s Jimusho boy idol Higashiyama Noriyuki (44) and actress Kimura Yoshino (34). The couple registered their marriage at a Tokyo municipal office on Saturday and announced the news with cookies and hand-signed letters sent to close friends. They sent a fax to the media on Saturday evening, just hours after Yoshino had appeared as a special guest at the opening ceremony of the 23rd Tokyo International Film Festival. The event’s closing ceremony on October 31 is expected to be her first public appearance as a bride and she will be in the full media glare. According to their management, the couple have no plans to hold a press conference and have not announced any date for a wedding ceremony.

The pair’s romance is said to have started when they appeared on stage together in March 2008 and was first reported in the media in November of last year. They immediately made a formal announcement acknowledging their relationship. They were expected to tie the knot this spring and when their work schedules kept them both busy through the summer, rumors grew of a split. But when he finished filming of the movie “Ogawa no Hotori” earlier this month, Higashiyama sought the advice of his close friend actress Mori Mitsuko (90). She advised him to take the plunge but be sure to choose an auspicious date to get married.
Related stories:
Higashiyama, Kimura are “Serious” (Nov. 30, 2009) 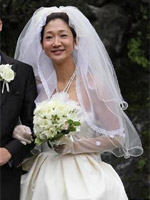 Abu-chan Has Her Day
Comedienne Abukawa Mihoko (36) got married to restaurant owner Masuya Shuichiro (37) at the Four Seasons hotel in Tokyo yesterday, followed by a reception for about 150 guests. Among them was her comedy partner Ito Saori (36), who herself got married to volleyball star Shinoda Ayumu (30) in April. Abu-chan is said to have doggedly pursued Masuya since they first met two years ago on the TBS morning show “Hanamaru Market.” She proposed to him in a most unusual way earlier this year on the “Haneru no Tobira” comedy show.
Related stories:
Abu-chan’s Wacky Wedding Ring (Apr. 8, 2010)