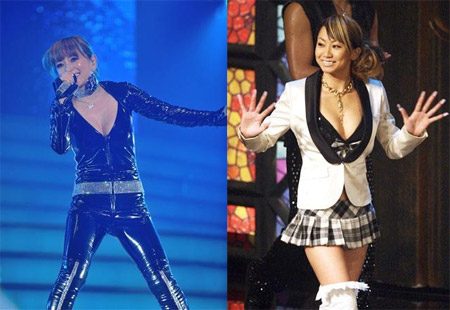 Show business organizers have started taking measures to deal with the surge in swine flu cases in Japan over the last couple of days. With the flu seemingly arriving in Japan with school kids who’ve been studying in North America, schools have been closed in the Kansai area where the cases have been concentrated. J-pop concerts and other events where teenagers would gather in large numbers are also an obvious risk. One of the biggest record labels, Avex Group Holdings, said they would ask concertgoers to disinfect their hands at venues this week. They will also provide iodine mouthwash in toilets and provide face masks for anyone seen to be coughing or sneezing. Avex have upcoming concerts by several major artists: Hamasaki Ayumi (May 20/21) and Otsuka Ai (May 23/24) at Osaka Castle Hall, and Koda Kumi at the Kobe World Kinen Hall (May 23/24). The Kobe venue is also scheduled to host Dreams Come True and Mr. Children this month. Another high profile organization, Johnny’s Jimusho, announced that they would be postponing concerts in the Kansai region. The group Kansai Johnnys Jr. were scheduled to play four shows over two days at the Umeda Geijitsu Gekijo theater in Osaka on May 23-24, but the shows have been indefinitely postponed. Johnny’s say they will notify the 7,600 ticket holders when new dates are decided. Actress Fujiwara Norika was scheduled to attend a Red Cross event at her old high school in Kobe tomorrow, but it has been canceled.