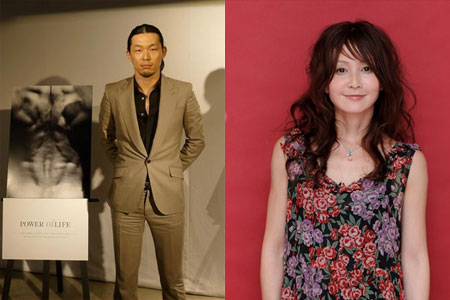 A couple of examples today of middle-aged women showing they’ve still got what it takes. Dancer Atsushi (30, photo left) has acknowledged for the first time his romantic relationship with actress You (44, photo right). He spoke yesterday at the opening of his “Power of Life” charity photo exhibition at Tokyo Hipster’s Club. Romance between the two has been rumored since a weekly magazine ran a story in 2006, but they have steadfastly refused to comment. Asked if they had plans to marry this year, Atsushi laughed and said, “I don’t know.” He is a dancer with rock band Dragon Ash (profile). You, who looks and sounds a lot younger than her age would suggest, is a former pop singer who won critical acclaim for her role in the 2004 movie “Dare mo Shiranai” (Nobody Knows). She debuted as a singer in 1985 and fronted the pop band Fairchild from 1988-93. She has been married twice, to a guitarist and an actor. 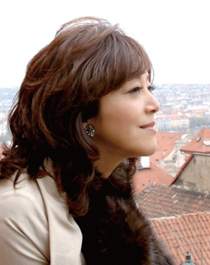 Meanwhile, singer Iwasaki Hiromi (50) announced that she and stage actor Kon Takuya (40) got hitched on Wednesday. The two first met when they appeared in “Les Miserables” in 1998 and have been living together for the last seven years. Sentimental types that they are, they decided to get married last November 12, their shared birthday, and registered their marriage at 11:12am. Iwasaki, who became a star in the mid 1970s while still in high school, was married from 1988-95 and her two teenage sons are being raised by their father. She released a new album in April and will make her return to TV drama for the first time in ten years later this month.