In a sense, Miyazawa Rie is old news. Certainly she is not the kind of media darling she once was. But she is a survivor who has developed into a talented actress and hers is an interesting story.

Born of an ambitious Japanese mother and a Dutch father she never knew, Miyazawa had a distinct kind of beauty from an early age. At the age of 12, she was one of the first bishojo, beautiful young girls who were used to promote products to the over-indulged offspring off the Japanese bubble years. Increasingly big-ticket TV commercials, including one with Arnold Schwarzenegger at his peak, rather than any pop idol success made her one of the best-known faces on the small screen. With this kind of marketing power, Rie-mama - as her mother was known - set up her own talent agency in order to retain control of her daughter's career. At the age of 18, Miyazawa was making 400 million yen a year from endorsements alone.

She made her big-screen debut in Bokura no Nanokakan Senso (Our Seven Days War) in 1988, for which she won the Japanese Academy Award for Best Newcomer the following year. Success followed success on the big and small screens but things reached a new level with the release of the nude photo book Santa Fe (above - click for larger picture) in 1992. The elders of NHK were shocked enough to drop Miyazawa from the New Year Kohaku special but her ever-increasing fanbase loved it. The book sold over 1.5 million copies in 3 months. Though it started a whole new trend, it remains the most famous and best-selling nude photo book in Japan.

And when the engagement was announced of Miyazawa to young sumo superstar Takanohana in October of that year, the media went epileptic. Entertainment news couldn't get any bigger than this. Except that early in 1993, relations soured between the two families. Various theories were spouted but it was generally believed that the young starlet was not ready to give up her career to become a traditional sumo wife.

That's where everything started going wrong. Not helped by the intense media glare and speculation, Miyazawa tried to kill herself in 1994 (though officially it was an accident) and her relationship with her mother became more and more fraught. Despite putting in a solid performance alongside Takakura Ken in Chushingura and having several other projects in the works, an increasingly gaunt appearance had the media speculating about an eating disorder. Miyazawa cancelled all projects and went to LA in early 1996 for help with her acknowledged problem with anorexia.

After her return to Japan in May of that year, Miyazawa started to rebuild her career. She reported for TV on the Cannes Film Festival and appeared in the successful Kyosokyoku drama that year. Several other low-profile roles followed and in 1999 she starred in the annual NHK Taiga historical drama series. With the beginning of a new century, Miyazawa's career as a serious actress really took off. She appeared in a couple of Chinese movies, including Peony Pavilion (2001) for which she won a best actress award at the Moscow Film Festival. 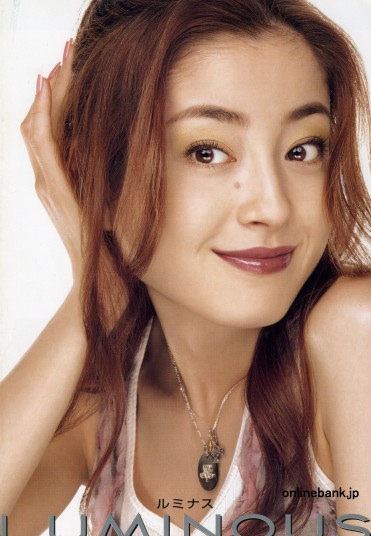 Then in 2002, she starred alongside Sanada Hiroyuki in Tasogare Seibei (Twilight Samurai), the year's hit movie that took a raft of awards at home, including ones for the lead actors, and was even nominated for an Academy Award as best foreign language picture. It was the first samurai movie by director Yamada Yoji, better known for his Tora-san series. 2004's Tony Takitani - a rare adaptation of a short story by bestselling author Murakami Haruki - received critical acclaim, with Rie playing two roles alongside Ogata Issey. The film, which was entered at the Sundance Film Festival, has been described as a "a perfectly controlled minimalist film masterpiece."

She seems to be over her anorexia, though she is still a slight figure, and she seems to wear the trials and tribulations of her topsy-turvy life on her mature but beautiful face. Perhaps it is these experiences that have elevated her above the often trivial nature of the Japanese entertainment world to become an actress with real soul.

Just before Valentine's Day 2009 she sent a fax to the media saying that she was engaged to be married. The fact that she was already six months pregnant can be seen as a plus or minus to that happy news, given how such marriages often work out in Japanese showbiz.