Brent Forrest and Tobias Schlage are film makers from Canada and Germany respectively. They've both worked in the animation industry for several years and in 2017 they teamed up in Tokyo. Japan Zone spoke with Brent about how he sees animation in Japan as an industry that is not only thriving and vibrant but also has great variety and allows for a lot of creative freedom.

Brent Forrest and Tobias Schlage are building a successful animation business in Tokyo.

"Japan has a long history of animated films and is a great place for artists," says Brent. "Not only in terms of work, but just walking through the streets, seeing the neon lights, visiting crazy places like Harajuku or serene places like the temples and shrines. It truly is a bottomless well of inspiration to walk the streets of Tokyo. Few cities have that unique energy, and for the creative person there is rarely a day that goes by without inspiration. Something is always vying for attention, whether it's the fashion or a 'kawaii' poster hanging somewhere. It never gets boring!"

The two met at work in a studio in Tokyo and soon realized that they were very much like minded — two guys with so many ideas piled up over the years that they could never make on their own. So, they decided to work together. They soon started work on their first film: Like and Follow, the story of a boy who takes a walk on a leash with his owner, a six-foot-tall anthropomorphic smartphone. "A simple concept, but simple things are not always easy to make." The duo spent an entire year making this film from start to finish — using after hours and weekend time, a lot of lost sleep and a lot of coffee. 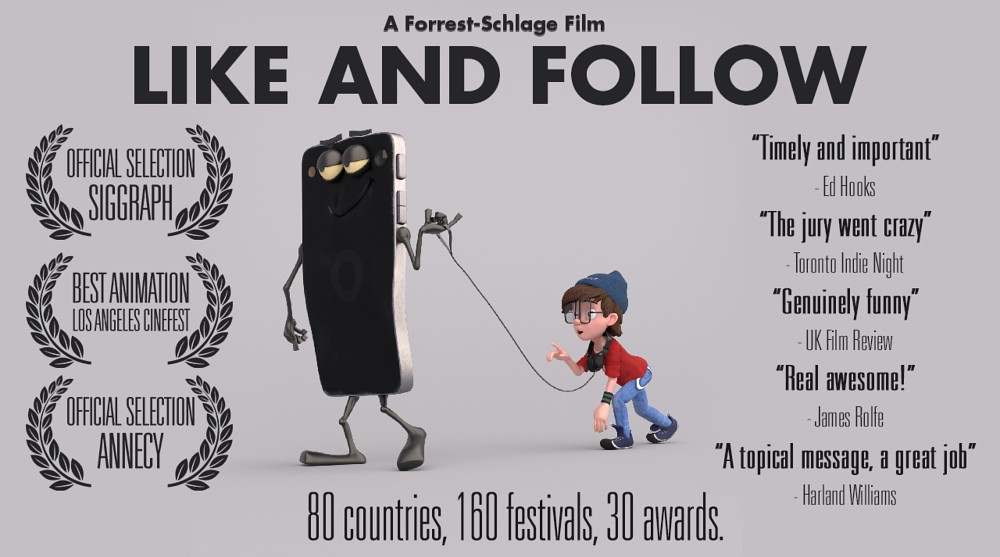 Like and Follow was created with the idea of addressing a timely topic in a fun way by creating a moving caricature, a striking image of a boy on a leash being walked by his owner — a smartphone. They knew from the start that the idea would resonate, but how to wrap up the story in a neat package, how to make it funny, that was the challenge.

Having finished a festival run the short film has now been released online. Tobi and Brent describe themselves as "thrilled" about the overwhelmingly positive reaction. The film has screened at 160 festivals including Siggraph Asia, Fantoche, The LA Cinefest and Annecy and has taken home an impressive 30 awards to date.

Among the laurels for Like and Follow are several Japanese awards including from the Ginza Film Festival, where Like and Follow was one of only five films selected for the inaugural year, and the Kadoma Film Festival, where it took home the Golden Lotus award. "It was a great experience being able to visit the festivals in Japan," say the duo, "seeing and hearing the audience react to the film. We were lucky to have the opportunity to join some of these fests before Corona really took hold."

A still from Like and Follow (left); Tobias Schlage (right) receives a award at the Ginza Short Film Contest.

"Being able to meet and connect with people is important. Online festivals are great, but it's very different meeting creatives, film makers and movie lovers in person. That is also basically the message of the film, that although digital is great and convenient, it just can't give you the same experience as live, in-person interaction."

The short was entirely independent, made by the two directors with zero budget. Especially worth mentioning, say the two, is Mohammed Hamid who helped a lot with lighting and rendering and was instrumental in the final critical hours of production. Tobi and Brent have grown their small team in Tokyo and are hard at work on their next short.

"What we love about Japan and especially Tokyo is that it has become a melting pot of different people and ideas, and we look forward to the future of Japan bringing people together. Just like it brought us, two people from two different continents, together in a big way."

Born in Montreal, Brent Forrest is a technical director and film maker living in Tokyo. He started his animation career at Red Rover studios in Toronto as a co-op student in 1999, where he learned the craft of animation from some of Canada's finest draftsmen. After a twenty-year career in animation he's pivoted into programming full time, while on the side he builds tools for animators and VFX artists.

Born in Hamburg, Tobias Schlage is a film director and animator living in Tokyo since 2015. In his years as a character animator and 3D generalist he worked in all areas of production creating extravagant visuals for film and television. Tobi came to Japan to explore a new film making landscape, combining both German and Japanese film making techniques to create a unique style of grounded, emotional storytelling. When he's not creating content he is busy developing concepts, writing, and wrangling the team.