I once had the pleasure of meeting a woman who was once the No.1 geisha in Japan. She's a wonderful lady, funny, warm and kind. She was once a favorite of my wife's grandfather who, with his many business and social connections, helped her find sponsors and make her name. He died many years back and more recently his wife - my wife's grandmother - also passed away. This lady unassumingly took control of all the everyday things at home - cooking, cleaning, child-minding - so that the family could grieve and deal with the multitude of funeral related matters.

In the evening she regaled us with geisha tales and parlor tricks. Some of the jokes and songs were surprisingly risque, but related with such grace and skill that no one could really be offended. She is well into middle age but I could see how, in her time, she must have drawn men to her like moths to a flame.

Arthur Golden's 1998 novel Memoirs of a Geisha revived interest in an aspect of Japan that is so intrinsic to the Western stereotype and yet so far removed from the reality of daily life here. Geisha do still exist and ply their trade, of course. But the role they play in modern society is minor and, except for the attention they get from camera-wielding tourists, largely unseen.

In fact, most of the women captured on film are either maiko (apprentice geisha) or local tourists themselves, done up for a few hours of faux sophistication and attention seeking. 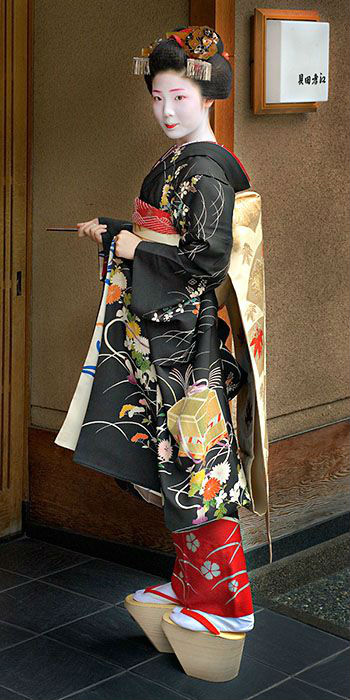 But like their male counterpart the samurai, the geisha and her world continue to fascinate people around the world as part of their image of a mysterious and timeless Japan. While prostitution is often referred to as the "oldest profession" and the history of the geisha stretches back several centuries, and although there have been times when the two overlapped, today's geisha should really be thought of as traditional entertainers.

Because while many people assume that geisha is just a Japanese word for a prostitute, the somewhat more romantic word 'courtesan' is closer in nuance, and even that is misleading when you consider their history. I remember exploring the history of geisha, preparing a culturology research paper in university - it came as a surprise that the word geisha itself literally means 'person of the arts' - indeed the earliest geisha were men - and it is as performers of dance, music and poetry that they actually spend most of their working time.

The two most famous hanamichi (geisha quarters) can be found in the capital cities of today and yesteryear, Tokyo and Kyoto. Medieval Edo, as Tokyo was formerly known, had the Yoshiwara pleasure quarters, where kabuki actors and artists would mingle with the evolving merchant class. The Edo period (1600-1868) was a time when Japan was largely closed to the outside world and also an era of great cultural development.

Actors, sumo wrestlers and geisha were often the subjects of colorful ukiyo-e, woodblock prints whose name literally means 'pictures of the floating world,' a wonderful euphemism for the world of carnal desires.

In the case of Kyoto, entertainment was to be found in the Shimabara district. Even today, maiko and geiko, as they are referred to in Kyoto, entertain customers in traditional teahouses.

Today's geisha have their roots in female entertainers such as the Saburuko of the 7th century and the Shirabyoshi, who emerged around the early 13th century. They would perform for the nobility and some even became concubines to the emperor.

It was in the late 16th century that the first walled-in pleasure quarters were built in Japan. Like so many aspects of Japanese culture, they were modelled after those of Ming Dynasty China. After they were relocated in the mid-1600s, they became known as Shimabara (after a fortress in Kyushu).

Meanwhile a marshy patch of land (Yoshi-wara) in Edo had been designated as the site for a brothel district under the auspices of the Tokugawa shogunate. Brothels and the like were not allowed to operate outside the district and strict rules were applied.

Included among these were that no customers were allowed to stay in a brothel more than 24 hours; courtesans were to wear simple dyed kimonos; and any suspicious or unknown visitors were to be reported to the Office of the City Governor.

With Japan enjoying a long-awaited period of peace following centuries of civil war, many samurai found that society no longer had such need of their services. It's thought that many daughters of these formerly noble families became courtesans, with the result that quarters such as Yoshiwara and Shimabara were places of refinement and culture.

Peace also brought an increase in prosperity and the rise of the merchant class, or chonin. Add that to the presence of artists and an atmosphere free of the strictures of the outside world, and it truly was something of an adult amusement park, with culture thrown in for good measure.

Within the hanamichi there were many different classes of courtesans, and over the decades the hierarchy and the standards expected of them changed many times, not always for the better. The situation deteriorated in the mid-18th century to the extent that a new form of entertainer emerged in Kyoto and Osaka.

The earliest geiko were men, while the first females, who appeared shortly after, were odoriko (dancers) or played the shamisen. Female geisha soon became popular enough to be able to steal clients from the courtesans, and in the case of Yoshiwara it was decided to start a kenban, or registration system, to keep them under control and force them to pay taxes. It strictly controlled their dress, behaviour and movements and was considered so successful that it quickly became the norm at hanamichi across Japan. 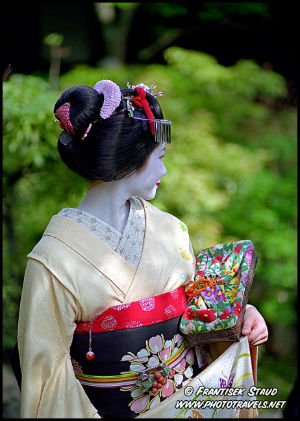 These strict rules in fact allowed the geisha to flourish as artists and entertainers. Though more simply dressed than the courtesans, they became regarded as fashion leaders.

But many aspects of the lifestyle itself were less glamorous. Young girls were sold into the geisha life by their families until the mid-20th century and were often subject to the ritual of 'mizu-age,' whereby their virginity was sold to the highest bidder. Such practices were eradicated after World War II and the geisha profession went into a steady decline.

Today, if geisha are hired to entertain at a private party outside the upper eschelons of society, they are most likely to be seasoned veterans, more akin to your favorite aunt or even grandmother than the girl next door.

Some of the colour photos on this page were kindly provided by photographer Frantisek Staud, who has a wonderful collection of photos of Japan among his many galleries. See PhotoTravels.net