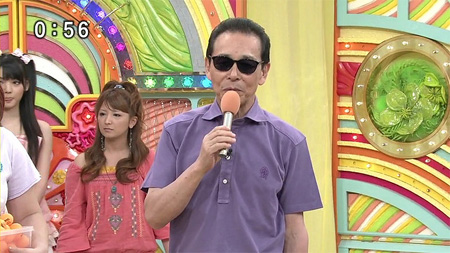 After all the updates on the damage being caused by the biggest typhoon to hit Japan in 10 years, today’s morning variety shows discussed the sad loss of animator Yanase Takashi. He died of heart failure on Sunday at the ripe old age of 94. Energetic and optimistic until hospitalized with liver cancer in August, Yanase was the creator of some of Japan’s best loved anime characters.

“Soreike Anpanman” was first broadcast in 1988, when Yanase was already a veteran at the age of 69. Starring a superhero with a head made of anpan (sweet bean bun) the central theme of the show for young children was justice, compassion, and self scrifice. Anpanman was regularly called upon to help those in need, when he would invariably let them eat a chunk of his anpan head. Yanase has said that the theme grew out of his harsh experiences serving in the Imperial Army in China during WWII.

Soreike Anpanman featured a never ending cast of characters, and was recognized by Guinness Book of World Records in 2009 for the record 1,768 different characters who had appeared on the show. After northeastern Japan was devastated in the March 2011 earthquake and tsunami, the show’s theme song was often played in the region to cheer up survivors.

Actress Toda Keiko (56) spoke of her sadness, “Mr. Yanase was the Anpanman. He embraced us gently and taught us to share. We’ve lost a precious guiding post.”

Yanase became a cartoonist after a more traditional career at a newspaper company and the Mitsukoshi department store. In 1961 he gained fame as the lyricist of the popular kids song, “Te no hira wo taiyo ni”.

When shopping online, there is nothing worse than finding exactly what you want to buy and not being able to actually buy it. Well, unfortunately that was what happened to many of our customers yesterday. The reason was a technical glitch caused during an overhaul of the payment processing system that resulted in an error for customers in the U.S. We worked through the night to both get the problem fixed and to stay in contact with those customers who were kind enough to point out the problem and give us a chance to sort out their order “manually.” A very big thank you to them for their patience and confidence in our ability to live up to our own high customer service standards. The good news is that we got all those orders sorted and they are being processed right now.

Still, I’d like to apologize to them and to anyone else who found their visit to Japan Store yesterday to be frustrating and a waste of their time. We will endeavor to avoid a similar situation happening again in the future.

But moving on, there is other good news – the overhaul now means we can offer Express Checkout from PayPal. This makes the checkout process incredibly simple if you have a PayPal account, and much simpler even if you’d prefer to pay by credit card (in which case you don’t even need to have or to open an account with PayPal).