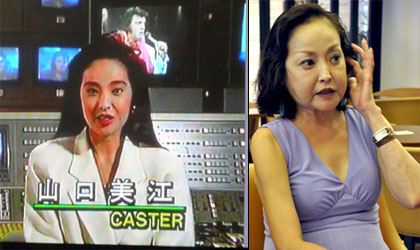 Talento Yamaguchi Mie died suddenly yesterday of heart failure at the age of 51, according to her management agency. They said Yamaguchi had been having dizzy spells since early February and had been seeking medical treatment. She gave a magazine interview on February 28 but her condition had worsened in recent days. A relative found her collapsed at her home in Yokohama yesterday afternoon.

A graduate of Saint Maur International School in Yokohama, the trilingual Yamaguchi was a rarity when she made her debut as the presenter of “CNN Headline” on the TV Asahi network in 1987. She became a popular TV personality and is remembered for a TV commercial for the food brand Fujicco and the catch phrase “Shibazuke Tabetai.” In 1996 she retired from show business to become an entrepreneur, opening a small import shop in Yokohama Chinatown. She closed the store last year. In 2008 she published a book on her experiences caring for her senile father, a topic on which she often gave talks.