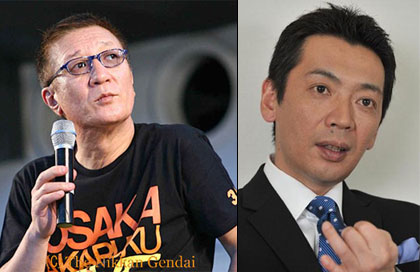 Outspoken singer and talento Yashiki Takajin (62, photo left) is taking an extended leave of absence to undergo treatment for esophageal cancer. Yesterday in a message to broadcaster Miyane Seiji (48, photo right) – someone who might be expected to fill his shoes – Yashiki said the disease had been diagnosed at an early stage and denied media speculation that he was considering retirement. He said that, as he did for his 60th, he still planned to perform a concert to commemorate his 65th birthday and is writing songs for the occasion.

Yashiki has several regular weekly slots on TV and radio. Yomiuri TV said he has already recorded this Sunday’s edition of “Soko Made Itte Iinkai” and the show will continue with a yet to be named replacement. Kansai TV and TV Osaka made similar statements about this Saturday’s editions of “Takajin Mune Ippai” and “Takajin No Money” and shows for the next week or two, though the schedule beyond that is undecided.