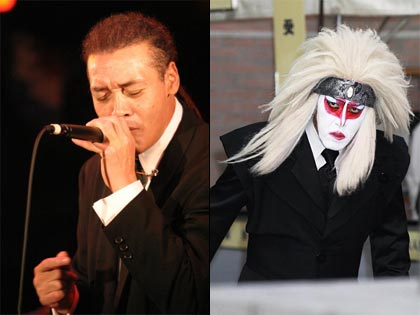 Aging rockers came out in droves yesterday to attend the wake of singer Jo Yamanaka (photo left), who died this week of lung cancer at a Yokosuka hospital. He was 64. The cancer was first discovered in February 2010 but rather than undergo surgery, Yamanaka was treated with radiation and chemotherapy. He remained active, joining friend Uchida Yuya (71) earlier this year in a campaign to support those who suffered in the March 11 earthquake and tsunami. His final concert performance was at the Crocodile live house in Harajuku, Tokyo on May 5. Other attendees at his wake included Kabuki Rocks star Ujigami Ichiban (photo right) in full character makeup.

His house in Kamakura burned down in September 2010, and he turned to friends Uchida and his estranged wife, actress Kiki Kirin (68), for support. They helped him find a new house in Yokosuka and also introduced him to a hospital in the southern prefecture of Kagoshima. He was hospitalized after he suffered a cardiopulmonary arrest in mid-July and never fully recovered.

Yamanaka was one of seven siblings, though the only one of mixed race as his father was a black G.I. He started out as a pro boxer before becoming the vocalist of “group sounds” band 4-9-1 in 1966. He fronted “Flower Travelling Band” from 1968, performing rock songs in English before the genre had taken hold in Japan. The band also performed in the U.S. and Canada, the first Japanese popular band to do so, in support of Emerson Lake & Palmer. They broke up in 1973, and only reformed in 2008. In September 2010 they released their first album in 35 years. Yamanaka is best remembered for theme song of the 1977 Matsuda Yusaku movie “Ningen no Shomei,” in which he also performed an acting role.

Japan’s music world also lost another singer this week, with the death from pancreatic cancer of enka star Hiyoshi Mimi. She was 64. She was best known for such 1970’s hits as “Otoko to Onna no Ohanashi.” In the 1980s she was a regular, along with Yamamoto Linda and Abe Ritsuko, on the legendary comedy show “Oretachi Hyokinzoku.” At a concert in Nagoya in May 2010 to promote a new single, she first revealed that she had undergone surgery for cancer.