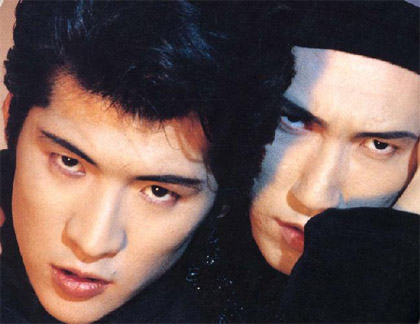 Rock singer Kikkawa Koji (45, photo left) is getting married today and already has a child, it was reported this morning. He and his new bride-to-be, described only as an ippanjin in her early 40s, have been dating since 2007. It is her second marriage but the first for Kikkawa. He announced the news through the website of his fan club.

A champion swimmer in his youth, Kikkawa dropped out of his Hiroshima high school to seek fame and fortune in Tokyo. In 1984 he made his recording debut with the single “Monica” and put out a string of chart-topping releases, becoming just the second artist to perform at the hallowed Nippon Budokan in a debut year. In 1989 he and former Boowy guitarist Hotei Tomoyasu (49, photo right, profile) formed the rock unit unit Complex. With both musicians towering over the average Japanese, the band made a big impact on the local scene. They were hugely popular but sort-lived, breaking up in 1990, until Kikkawa recently announced two reunion concerts at Tokyo Dome in July in aid of Tohoku relief. He also has a solo show lined up at the Yokohama Arena in October. Kikkawa has some high-profile acting roles in his resume, including the 2009 NHK taiga historical drama series “Tenchijin.”