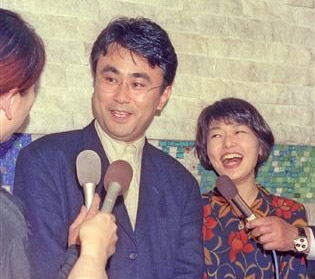 Top screenwriter Mitani Kouki (49) and popular actress Kobayashi Satomi (46) took the entertainment world by surprise with today’s announcement of their divorce. In a statement faxed to the media, they said they filed for divorce yesterday, ending 15 years of marriage. They said that many minor differences in opinion and values had accumulated over the years. No doubt their mutually busy showbiz careers also put a strain on their relationship. Sources close to the couple confirmed that they had grown apart in recent years and their lack of children had also played a part.

Mitani has penned many hit movies, TV dramas and even the first Japanese musical to play off-Broadway, and to mark his 50th year he has seven major projects in the works this year. Kobayashi is an established and naturally talented actress who regularly appears in TV commercials and dramatic roles. This week she starts filming the movie “Tokyo Oasis.” She met Mitani when she starred in one of his shows, the 1989 Fuji TV comedy series “Yappari Neko ga Suki.”

The Highs and Lows of Marriage
Sayonara, Nagato Hiroyuki