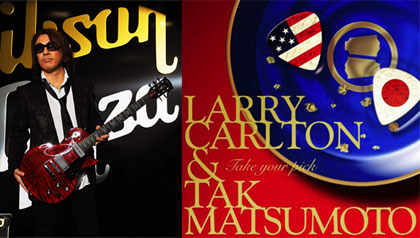 Matsumoto Takahiro (49) has been nominated for a whole bunch of Grammys. Well, he has to share them. The B’z guitarist, billed as Tak Matsumoto, collaborated with Larry Carlton (62) on the successful album “Take Your Pick,” which has been nominated in no less than nine Grammy categories: Record of the Year, Album of the Year, Best Pop Instrumental Album, Best Pop Instrumental Performance, Best Rock Instrumental Performance, Best Instrumental Composition, Best Instrumental Arrangement, Best Engineered Album, Producer of the Year – Non-Classical. Carlton already has 18 Grammy nominations and three awards under his belt for his jazz guitar releases. His main style is fusion, but he’s also happy to play rock or pop, and he’s known for his session work with Steely Dan, Michael Jackson and others. The Grammy awards ceremony will be held in Los Angeles on February 13.

Thanks largely to the huge and loyal B’z fan base, the “Take Your Pick” Japan tour sold out 18 shows in just 20 minutes. The tour culminated in a spectacular headlining performance at the world famous Tokyo Jazz Festival in early September. The 12-track album, recorded last year and released worldwide in June, entered the Oricon charts at No. 2, a rare feat for an instrumental recording.