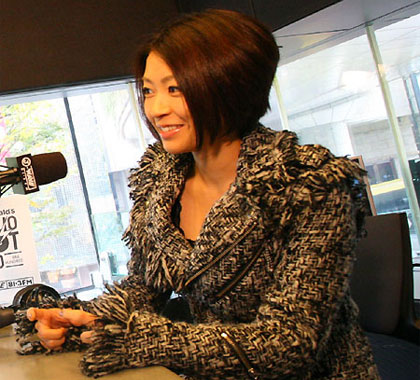 J-pop star Utada Hikaru (27) yesterday spoke publicly for the first time about her recent decision to take an indefinite break from her music career. Appearing on the J-Wave radio station in Tokyo, she talked with DJ Chris Peppler on his “Tokio Hot100” show.

He jokingly referred to her comment that she wanted to engage in more “human activities,” to which she replied, “I want to take a step away from musical activities, to return almost to zero.” She also said she’d like to spend more time getting to know her father, with whom she has had a mostly working relationship for the last decade, and doing volunteer work overseas. She went on, “I didn’t want to be a woman in my 40s and 50s who can’t do anything for herself without the help of a manager. I guess I never really grew up.” A mega-star since her mid-teens, she said, “I didn’t know what my rent was. I never had to think about basic things like paying my utility bills or balancing a bank book. That may be cute in a 15- or 16-year-old, but I thought it was pretty uncool to become that kind of adult.” She used the phrase “itai otona,” which literally means “painful adult” and it just might catch on with the Japanese media and public.

The show also featured Utada’s new single “Goodbye Happiness,” which is included on the hits album “Single Collection Vol.2” that goes on sale Wednesday. She referred to it as an “antithesis to today’s pop music.” Utada directed the promo video, which has already been viewed over 1.2 million times on YouTube. Done in the style of a computer video chat, it appears to have been done in one take and includes references to earlier videos she has made. Utada will perform two concerts at the Yokohama Arena on December 8 & 9 before going into early “retirement.”