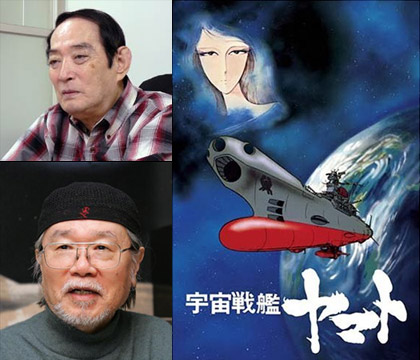 Nishizaki Yoshinobu (photo top left), the producer who brought one of Japan’s most popular mangas to the TV screen, has died in an apparent drowning. He was 75. The classic 1974 science fiction anime “Uchusenkan Yamato” (Space Cruiser Yamato) is one of the most famous works of Matsumoto Leiji (72, bottom left), but he shares writing credit with Nishizaki, who originally conceived the project in 1973. There were many sequels and spinoffs and the two men fought over legal ownership and credits for years. The matter was taken to court, but the two reached an amicable settlement in 2003. That wasn’t Nishizaki’s only trouble with the law – he was arrested several times for possession of drugs and firearms, serving almost three years in prison. Nishizaki’s most recent anime work, “Uchusenkan Yamato – Fukkatsu Hen” (Yamato Rebirth), was delayed for some time by his imprisonment and further legal conflict before finally hitting theaters in December 2009. A new live action movie, “Space Battleship Yamato,” starring Kimura Takuya and Kuroki Meisa, is due for release on December 1.

Nishizaki’s untimely end came while he was sailing with an 8-man crew on the 485-tonne research ship “Yamato” of the coast of Chichijima in the Ogasawara Islands. His body was found in the water on Sunday afternoon. He was wearing a wetsuit and is thought to have fallen overboard.

Manabe Quits Blogosphere
Talento Manabe Kaori (30) has quit the online forum that over the last few years established her as “Queen of the Japanese Blogosphere.” She started the blog, “Manabe Kaori no Kokodake no Hanashi” on Nifty’s Cocolog service in June 2004. Her plain way of speaking and unique point of view quickly drew in a large fan base. A collection of entries was published in paperback form in 2005 and became a bestseller. The blog now carries a brief message saying that it was taken offline on October 31. Archived entries are no longer viewable.