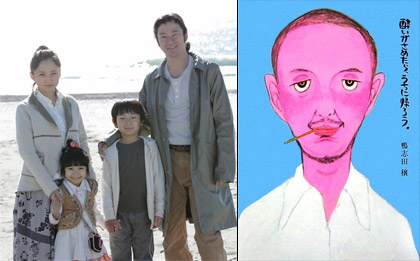 Actor Asano Tadahiro (36, photo right) and actress Nagasaku Hiromi (39, photo left) appeared at a PR event in Tokyo yesterday for their latest movie collaboration. “Yoi ga Sametara, Uchi ni Kaerou” (When We Sober Up, Let’s Go Home) is an adaptation of the autobiography (right) of the late freelance journalist and war photographer Kamoshida Yutaka (1964-2007). From his exposure to the atrocities by the Khmer Rouge in Cambodia through many years of facing death and the weapons of child soldiers, Kamoshida developed a reliance on alcohol that would lead to his death of kidney cancer at the age of 42. In 1996, he met manga-ka Saibara Rieko (45) on location in Thailand. He agreed to be the photographer for her planned cable TV show to be filmed in the Amazon. On their flight back to Asia, he proposed and soon made his first return to Japan in 9 years to get married. He was the inspiration for a regular character in Saibara’s “Mainichi Kaasan” comic strip in the Mainichi Shimbun newspaper.

The couple had two children but Kamoshida’s drinking took a heavy toll and he was in and out of the mental ward. The two remained close even after their marriage ended in 2003. His autobiography was published in 2006, in which he first revealed his battle with cancer and the couple reunited while remaining unmarried.

Asano, who had a very public divorce from singer Chara (42) last year, said, “I got to play a bad husband, and as I was one myself, I guess I did a good job.” Nagasaku, on the other hand, was making her first public appearance since having a baby in May. She said of playing Saibara, “I thought it was a very demanding role, but now I’m glad I did it.” Directed by Higashi Youichi, the movie opens on December 4.