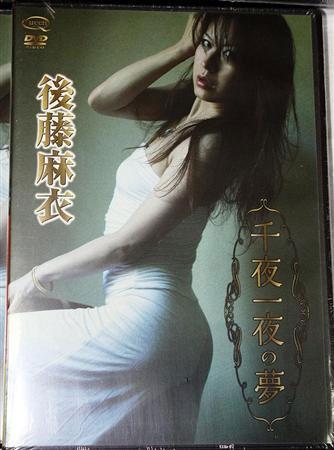 In what is believed to be the first case of its kind, an actress and a former company president have been arrested for distributing indecent materials in a so-called “image video.” Actress Goto Mai (36) and Fujiyama Masanori (40), former president of the DVD production company Kingdom, were arrested in connection with sales of the “Senya Ichiya no Yume” (Arabian Nights) DVD last year. According to the police Public Morals and Safety Division, the video was filmed in the United Arab Emirates in March 2008 and sold on the Internet from the end of last year. The DVD was featured in a weekly magazine, which brought it to the attention of the police and they searched the offices of Kingdom in February. Goto began her show business career when she was runner up in the annual Clarion Girl contest. She worked as a reporter for the raunchy late night show “Tonight 2” and as a race queen. She has been appearing in videos and photo books for Fujiyama for about ten years. Though she appears alone in the videos, the content has been overtly sexual. When first introduced, image videos went no further than to feature swimsuit-clad young idols, but the trend has increasingly been towards more borderline pornography in recent years. Roughly a quarter of the 50-minute video features images where Goto’s genitals can be seen uncensored. 5,000 copies of the DVD were produced and were sold out early this year, with the company making ¥9.68 million. Goto was paid about ¥5 million for the DVD appearance and two other projects shot while in the UAE. Copies have been traded on the Web for more than ¥20,000 each. Article 21 of the Japanese Constitution guarantees freedom of expression and prohibits formal censorship. But this arrest was based on Article 175 of the Criminal Code of Japan, which these days is interpreted to require all pornography to be at least partly censored. Such arrests have been very rare. Fujiyama is said to have confessed to the charges against him, while Goto says she worked under the impression that what she was doing was not indecent.