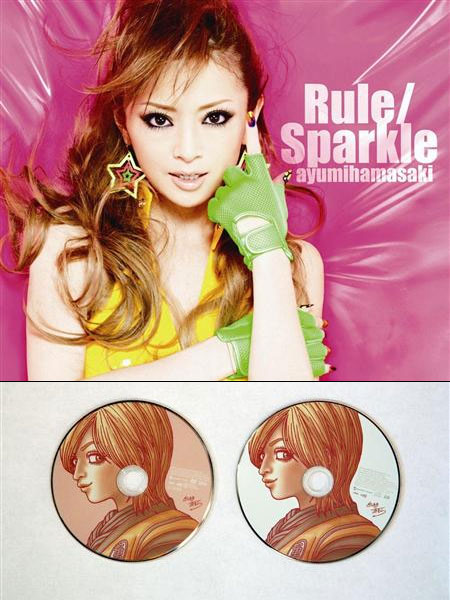 Popular manga-ka Toriyama Akira has been commissioned to draw an illustration of J-pop queen Hamasaki Ayumi (30, profile) for her latest single. The connection of course is that “Rule” is the theme song for the global release of “Dragonball,” the Hollywood adaptation of Toriyama’s mega-popular manga. The first pressing of the single will be printed with the image of Hamasaki as the character Goku on both the CD and an accompanying DVD. It is the first time for Toriyama to create an original illustration for a recording artist. He said, “Actually I’m really not good at caricatures, and for a while I regretted taking on this job. Hamasaki-san has so many fans and I hope they don’t get angry that the image doesn’t resemble her!” Called “Dragonball Evolution” for its Japan release, the movie opens here on March 13. The double-A side single “Rule/Sparkle” goes on sale February 25.

• Actor Takahashi Hideki (64) revealed yesterday that he was recently hospitalized with a broken back. Appearing with his wife Mieko (60) at an award ceremony in Tokyo, he said he slipped on an icy road while filming a drama in Fukushima on January 14. He injured his back and was rushed to a nearby hospital, where he was diagnosed with a broken lumbar vertebra. The next day he was transferred to a hospital in Tokyo, which he left only last weekend. At yesterday’s event, where he and his wife were named as Best Cruise Couple for 2009, he said he was wearing a corset and his injury wuld take about three months to heal. He heads back to Fukushima on February 20 to continue filming the TV Tokyo detective drama series “Sousa Kenji – Chikamatsu Shigemichi.”

• The NTV network yesterday said that they will be further reducing the number of live terrestrial broadcasts of Yomiuri Giants games in the upcoming baseball season. The number of broadcasts, once staple viewing for families across the nation, will be cut by 16 to 26 games including the opening three games of the season and those against perennial rival the Hanshin Tigers. Baseball in general has seen declining TV audiences over the last few years, with the Giants in particular losing their once overwhelming appeal, and falling ratings have made it harder to attract advertising. The number of games to be shown on NTV’s satellite channels will be increased. NTV is under the same corporate umbrella as the Yomiuri team.

• Johnny’s Jimusho duo Kinki Kids have extended their Guinness World Record for consecutive No.1 singles to 28. With “Yakusoku” reaching the top of the latest Oricon chart, they now have a No.1 single in each of the last 13 years. Meanwhile on top of the album chart is Koda Kumi’s “Trick.”

• Talento Hazama Kampei (59) posted a video entry to his blog yesterday to mark his crossing of the International Dateline in the Pacific Ocean. He recently embarked on a walk around the world, crossing the oceans by yacht. The endeavor is expected to take up to three years, though Hazama has considerable experience of long-distance endurance events. He expects to reach land in Los Angeles at the end of this month or early March.