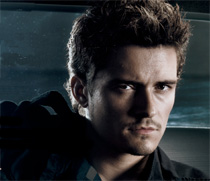 British Hollywood star Orlando Bloom (30) will make his first ever television commercial appearance tonight on Japanese TV. Billed as a one-night-only event, a 2-minute version of the commercial for Shiseido’s men’s cosmetics brand Uno will air on three networks around midnight (see Shiseido’s website for details). Each network will have a different keyword after the CM, with all three needed to enter for a prize draw. The CM features the “Pirates of the Carribbean” star in a futuristic setting – in the year 2019, his character Neo is being pursued by unknown forces and uses the “New Fiber Neo” hair gel to disguise himself. The soundtrack is an “Uno” reworking of the Quincy Jones classic “Ai no Corrida”.

• Comedian Nagai Hidekazu (37) is leaving his wife and 2-year-old son behind to pursue his dream of studying in New York. He plans to spend a year in the Big Apple studying English, and not just aiming for conversational level but in order to be able to perform in English. Nagai made his breakthrough in 2003 with his catchphrase “Machigainai!”