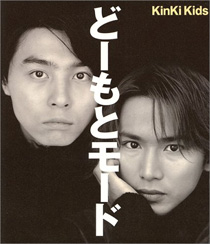 Pop duo Kinki Kids held two events at Tokyo Dome over the weekend to celebrate ten years at the top of the J-Pop world. On Saturday, Domoto Tsuyoshi (28) and Domoto Koichi (28), who are unrelated, were officially recognized by the Guinness Book of World Records for an amazing accomplishment. Since their debut single release (Garasu no Shonen) in July 1997, every one of their 25 singles has entered the Oricon chart at No.1, the latest chart topper being “Brand New Song” in April. The feat earned them a place in this year’s Japanese-language edition of the record book, and Guinness World Records’ COO Alistair Richards paid a rare visit to Japan to pay tribute to the duo, “In the highly competitive Japanese music world, to remain at the top for ten years is a remarkable achievement.” On Sunday, they played a 10th anniversary concert at the Dome. The stage was designed to be as small as possible to make room for 67,000 fans, the largest concert audience ever at the venue. It was their 28th show at the Dome, also a record. Along with stable-mates SMAP, Kinki Kids have been flag bearers for of the Johnny’s Jimusho empire for even more than a decade. Even before their heavily hyped 1997 debut, the duo had played concerts to a combined audience of 2 million fans and they were the first artists promoted by the then newly-formed “Johnny’s Entertainment” company.

• Kitano “Beat” Takeshi’s latest project is doubly difficult. In his first TV drama starring role in five years, he not only has to memorize a lot of lines for his role as a detective, he also has to recite them in the distinctive Hakata dialect. Takeshi (60) was on location in Kanagawa prefecture over the weekend filming “Ten to Sen” (Points and Lines), which will air on TV Asahi over two nights in the autumn. He said he lost 5 kilos for the role. The drama, which co-stars Uchiyama Rina (26), is based on the detective novel by the famous Matsumoto Seicho (1909-1992) that sold over 3 million copies.